Daniel Ionson Musings on the Craft of Writing

So life (and writing) have kept me from writing here for a good long time, as you can see.  Anyway, I haven’t died, and I’m still hammering away at the keys.

Here I am posting an old (old) essay I wrote when I was developing my own Role Playing Game System.  It has some applicability to writing, so… here we go.

The quotes herein are from Tolkien’s On Fairy Stories.

“Fantasy is a natural human activity. It certainly does not destroy or even insult Reason; and it does not either blunt the appetite for, nor obscure the perception of, scientific verity. On the contrary. The keener and the clearer is the reason, the better fantasy will it make.” p.54

People have asked me countless times over the years of my system’s development, “why bother making a system with a strong emphasis on realism?”  Those who comprehend the issue the least will say “It’s fantasy!  Why are you even discussing “realism”?  These people believe that the phrase “realistic fantasy” is a contradiction in terms.  This comes from a misunderstanding of what we mean by ‘fantasy.’  ‘Fantasy’ here does not mean unrealistic or unreasonable, rather “different” or “alternate.”

To others more versed in current role playing trends, however, the issue is not that confused.  Various RPG creators have made systems with realism in mind.  The trend is even extending itself into computer RPGs (consumers seeking physics engines, character necessities like eating and sleeping, and psychologically “real” people).

However, a realistic system is not justifiable just for realism’s sake.  Who really cares about the minutia of average running speeds, the actual time required to reload a crossbow, or that a shield is a far better defense than mere parrying when the participants want to role play epic heroes?  Rather, it’s what (properly applied) realism facilitates that makes it worthwhile—Immersion.  A gaming world closely aligned to the real one (in relevant categories and methods) strengthens the potential relational depth between the players and their characters, and the world that those characters inhabit.

I do not assert (necessarily) that the more closely aligned the game world is to the real one the deeper the immersion.  It is not a 1:1 correlation.  It’s quite possible to have a realistic gaming world (where a wealth of research has produced perfect harmony with the facts of our world) with no deeper immersion than in a wildly uninformed one.   A world with accurate details does not by itself draw in an audience into the tale inside that world.  Only a quality tale (with mature participants allowing that tale to flourish) can generate immersion.  But even a great tale with excellent participants END_OF_DOCUMENT_TOKEN_TO_BE_REPLACED

►Preserving the Otherworld – (Contaminants to the Fantasy genre)

We who love fiction share a mixed appetite for varying levels of drama, conflict, intrigue, mystery, action, etc. But why do some of us love Dark Age Fantasy in particular? I think that on the deepest level we choose the Fantasy genre for a specific reason—to step into the “Otherworld,” a premodern, open world that is radically different from our own world. And it’s not simply to have a “different” world than ours—if that were the case then any other genre would do just as well (especially sci-fi).

Fantasy-lovers want a particular feeling—the feeling of mystical, Dark Age Otherness. The typical pictures are some mixture of King Arthur’s Camelot and Tolkien’s Middle Earth, filled with endless forests, dangerous caverns and mystical glades. We want the magic of that old mythology brought to life over and over in the Fantasy tales we read.

Of course, our reading pallets vary on what triggers distaste, but I also think it’s not completely subjective. Some of us hate spicy foods, some love it, but we all pretty much agree that some foods do not belong together. We may love pizza or peanut-butter or oatmeal, but we don’t throw them together in a blender to consume them. We can at least agree that genres should maintain some boundaries, else the very meaning of ‘genre’ falls apart.

And here is my problem with some (especially contemporary) Fantasy—Modernic contamination.

Dark Age Fantasy is much more than simply a primitive technological status. What turns me off as a reader is a Fantasy tale that feels like the world is filled with a million LARPers/SCA members instead of people and societies of this desired Otherworld. They are (hopefully) lacking guns and cars, but the anachronisms do not stop with tools and toys.  Other jarring anachronisms include Fantasy characters who possess our modern psychology and worldview.

Ghosts, spirits, witches, curses and gods should be unquestionably real and dangerous to these people. Fantasy characters should never deconstruct religion or gods; characters in these worlds may be terrified (or even hate) these supernatural elements and creatures, but never sit back in their philosopher’s chair and explain a culture’s “mythological inheritance.”  Skepticism (and atheism) should be alien to these worlds. These characters should feel awe and reverence with the creatures of faerie.

A Fantasy world should feel vast, and largely unexplored. Most importantly, it should feel untamed. The world should not be cleanly mapped out, hex-by-hex. Knowing the world in this detail shrinks it, diminishing its mystery and magic.

And speaking of magic… This is a major toothache. Characters in Fantasy worlds should never take magic lightly. Magic should never be equated with science. Magic isn’t just about the effect it brings. A spell that gives light is not just a substitute for a flashlight.  A spell that wounds someone is not just the counterpart to a gun.  Scrying is not radar detection. The point of a Fantasy setting is to generate this feeling of the Fantasy-Other. Science & modern technology gives us measurements and equations; magic is the tapping into the ineffable—the realm of the faerie. Magic is bound up with mystery and (sometimes) the divine.

So how did these contaminations become common? While it could simply be the passage of time with such a large number of Fantasy authors writing now as opposed to 30 years ago, I think that a huge Fantasy-breaking influence has come from RPGs (and CRPGs) where there is no attempt at generating/preserving the feeling of the Fanasty Otherworld. [This is also a loss to the Fantasy RPG community, who, albeit to a lesser degree than in literature, could pursue this Otherworld-feeling in their gaming sessions.]  Some Fantasy writers (and the readers who buy their books) grew up playing C/RPGs, and do not feel the pull of the old otherworldliness.  In fact, they may have no idea what this entire post is about.

Perhaps, as King wrote, “the world has moved on,” and the days of this “true Fantasy” are ending. I hope not. I know that trends move all over the spectrum. But I think it would be an incredibly large loss if the spirit of Fantasy was lost in the morass of modernity.

Here’s the other half of me, where I write philosophy (and other clutter in my head).  I published my first philosophy book yesterday.  Please enjoy and comment.

I’m happy to announce the release of this edition of After Life.  It’s now available in both paperback and e-book versions. 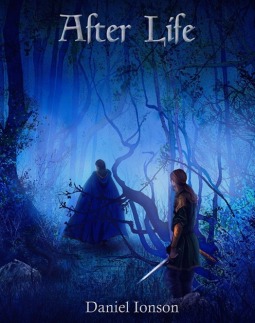 ►Cover Art for After Life

Here’s the new cover art for the new edition of After Life.  I’m thrilled with it.

Sorry for the long cricket-chorus. Life decided to rearrange itself under me. Things are still unsettled, but I’ve made progress nonetheless.: I’m ~80% done on draft one of my new novel. My first novel, After Life, has been re-reedited and gets republished within 2 weeks, even printed this time. Also, I’m finishing up work on a new website.

While my own life is caught in the fecal-flinging whirlwind of having to move, I decided to host a few guest posts.  This is Graeme Brown, a Fantasy author END_OF_DOCUMENT_TOKEN_TO_BE_REPLACED

Discouragement for a writer is crushing, paralyzing.  If we don’t believe in our work many will falter, regardless of the strength of our skill and the project.  A writer’s morale is vital for, just like an army, if it believes it is defeated… it is.

But there is another demon at work in a writer’s life, one that generates the opposite emotional reaction: Delusion.  We can END_OF_DOCUMENT_TOKEN_TO_BE_REPLACED

►Writing on Both Sides of the Brain

This is one of the first books I read on novel-writing, and it saved me.

I’d always been a tyrant with myself as I wrote, slicing into each section, paragraph and sentence as I typed it on the page. I was driving in circles.  Henriette Klauser’s book helped free me from that habit.